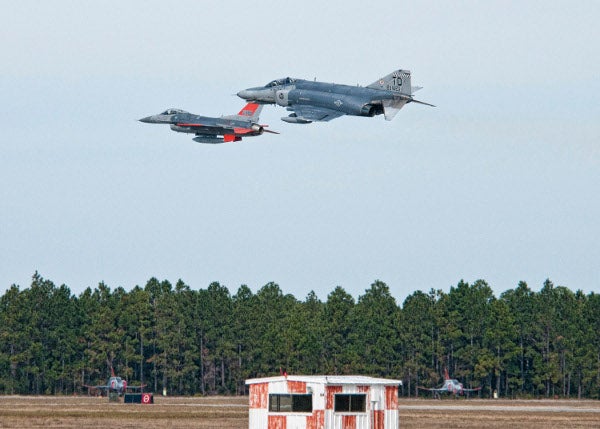 Boeing has handed over the first QF-16 full scale aerial target (FSAT) drone to the US Air Force’s (USAF) 53rd Weapons Evaluation Group (WEG) for developmental testing at Tyndall Air Force Base (AFB) in Florida, US.

Supported by Boeing Global Services and Support, the six-month developmental tests are scheduled to evaluate the drone’s capabilities and ensure compatibility with the Gulf Range Drone Control System (GRDCS), which enables its unmanned operation.

Developmental testing will be followed by a four-month integrated testing period at Holloman AFB in New Mexico, US, after which the drone will undergo a transition period in an effort to achieve initial operational capability (IOC) at Tyndall AFB.

"In the imminent future, the QF-16 will take air-to-air testing and evaluation to the next level," Wilkins added.

The QF-16 is a modification of USAF’s decommissioned F-16 Fighting Falcon fighter jets, and is designed to serve as a realistic FSAT for newly developed air-to-air weapons’ developmental and operational testing by the US and allied militaries.

Boeing received an initial $69.7m engineering, manufacturing and development (EMD) contract from USAF in March 2010, to begin the first phase of the QF-16 programme with options for procurement of up to 126 FSATs by 2014.

The first production QF-16 is scheduled for delivery in 2014.

Image: the first QF-16 FSAT, escorted by a Q4-F arrives at Tyndall Air Force Base in Florida, US. Photo: courtesy of Chris Cokeing, USAF.