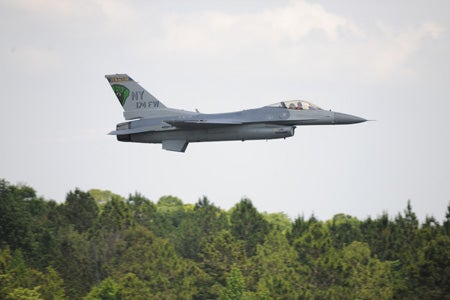 The US Air Force (USAF) is set to take delivery of six QF-16 Full Scale Aerial Target (FSAT) drones from Boeing for additional testing over the Gulf Range, before the end of 2012.

Boeing global maintenance and upgrades business vice president, Torbjorn Sjogren, was quoted by Flight Global as saying that Boeing had completed the first test flight of the aircraft and evaluated various aspects of its unmanned capability.

The aircraft had undergone manned flight testing to demonstrate the basic performance of the newly installed modification package on 4 May 2012 at Cecil Field in Jacksonville, Florida, US.

The QF-16 is installed with advanced features such as flight termination and visual augmentation systems to simulate fourth-generation threats like the Russian Mikoyan MiG-29 Fulcrum or Sukhoi Su-27 Flanker fighters, but the USAF has not yet defined the added capabilities it requires, according to Sjogren.

He said: "There are capabilities that could be added. Right now, the principle deliverables we’ve got are to provide an aircraft that is an F-16 converted to manned or unmanned."

Boeing was awarded an initial $69.7m engineering, manufacturing and development (EMD) contract in March 2010, for conversion of USAF’s retired Lockheed Martin-built F-16 jets into QF-16 drones, for use as aerial targets against newly developed weapons and tactics.

The contract also included options for acquisition of a total of 126 FSATs by 2014.

Boeing is scheduled to conduct a systems verification review in August this year followed by the start of EMD next month.

The modification package of the QF-16 enables flight in an unmanned mode under the control of a ground-based control system, such as the Gulf Range Drone Control System (GRDCS) at Tyndall Air Force Base, Florida, US or the Drone Formation Control System (DFCS) at White Sands Missile Range (WSMR) in New Mexico, US.

Image: The QF-16 target drone during its first manned flight at Cecil Field in Jacksonville, US. Photo: courtesy of Boeing.