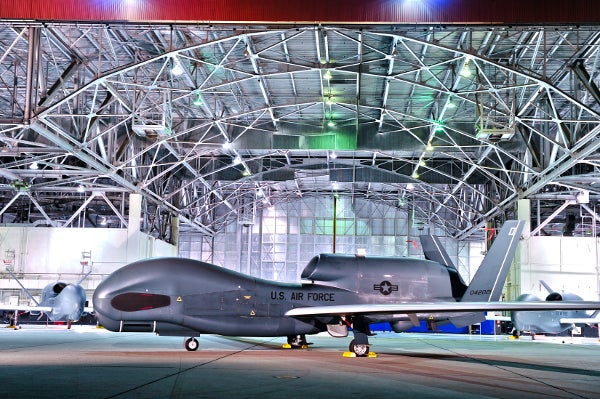 Northrop Grumman has received an advance procurement contract from the US Air Force (USAF) in preparation for production of additional RQ-4 Global Hawk unmanned aircraft systems (UAS) and associated sensors.

Northrop Grumman Global Hawk UAS vice-president George Guerra said the contract reaffirms USAF’s commitment to the safe and cost-effective UAS, which has been supporting warfighters for more than 15 years in the US and abroad.

Powered by an Allison Rolls-Royce AE3007H turbofan engine, the RQ-4 Global Hawk is a high-altitude, long-endurance (HALE) UAS designed to provide field commanders with high-resolution, near real-time imagery of large geographic areas in support of military, humanitarian and environmental missions.

"Global Hawk is also being used by NASA for scientific and environmental research projects."

Capable of carrying a range of intelligence, surveillance and reconnaissance (ISR) sensor payloads, the UAS enables commanders to detect moving or stationary targets on the ground, and also provides airborne communications and information sharing capabilities to military units in harsh environments.

The remotely piloted UAV has been used by USAF during wars in Iraq, Afghanistan and Libya, in addition to supporting intelligence gathering and reconnaissance efforts after the earthquakes in Haiti and Japan.

Global Hawk is also being used by NASA for scientific and environmental research projects.

Manufacturing work under the contract is expected to be completed in 2015.