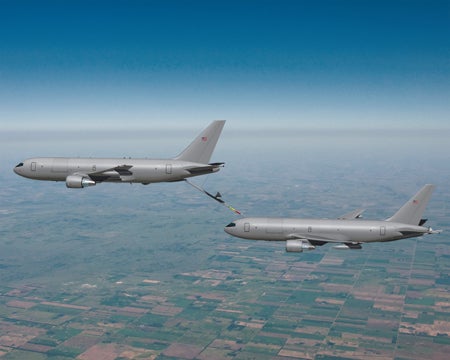 The US Air Force (USAF) has released the guidelines that will determine candidate bases for the new KC-46A tanker formal training unit (FTU) and the first two main operating bases (MOB).

Approved by USAF secretary, Michael Donley, and Air Force chief of staff, General Norton Schwartz, the MOBs will be selected on factors that include mission, capacity, environmental and cost.

All sites will be evaluated by the Air Force against the approved criteria and the information will be used to identify candidate bases for the KC-46A.

The Air Force will announce KC-46A preferred and reasonable alternatives based on Air Mobility Comamand’s surveys of the prospective sites, and will begin the environmental impact analysis process (EIAP) for the FTU and MOB 1 in December 2012 and MOB 2 in the spring of 2013.

The KC-46 is a military aerial refuelling and strategic transport aircraft designed to replace the Air Force’s aging fleet of KC-135 Stratotankers, which have been the primary refuelling aircraft for more than 50 years.

As part of the KC-135 replacement programme, Boeing is under a contract to deliver 18 KC-46 refuelling aircraft by 2017 to the USAF, which will continue until 2028, with the initial flight of the first aircraft is scheduled to take place in late 2014.

Image: Boeing KC-46 tanker is capable of serving as either a tanker or a receiver. Photo: courtesy of Boeing.