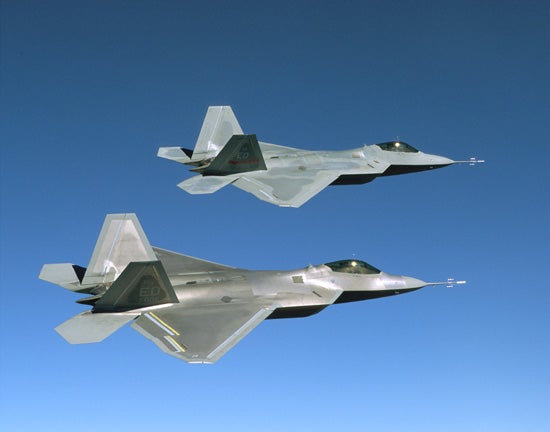 The US Air Force (USAF) has begun an immediate action Time Compliance Technical Order (TCTO) on the F-22 Raptor’s Emergency Oxygen System (EOS) to ensure full functionality in the wake of its increased usage under current operating procedures.

USAF pilots operating the F-22 experienced performance abnormalities on some of the EOS activations, which were analysed and corrective measures validated and verified.

The EOS is a self-contained, pilot-activated backup liquid oxygen system mounted on the jet’s ejection seat and designed for use during main life-support system failure.

The EOS is a precautionary measure to protect pilots when they are faced with air supply problems.

The radar-evading F-22 Raptors have been barred from flying above 25,000ft since January 2011 following the crash of a jet in Alaska during a training flight as well as reports about pilots facing oxygen-related problems while flying the aircraft.

The fleet resumed flight operations in September 2011 following a four-and-a-half month grounding after mitigating the risk factors associated with the aircraft’s oxygen system.

The F-22A Raptor is a supersonic, advanced tactical jet powered by dual F119-100 Pratt & Whitney engines, and is designed for stealth and greater cruise speed and agility. The aircraft has been used by the USAF since December 2005.

The USAF currently operates about 175 Raptors and is scheduled to receive new F-22s from Lockheed Martin.