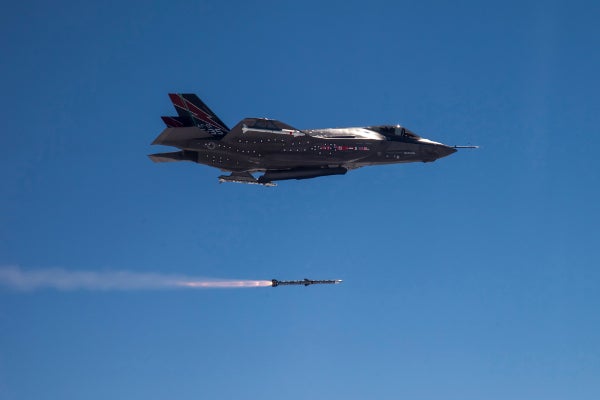 The US Air Force has announced the completion of the first in-flight missile launch of an AIM-120 by the F-35A fifth-generation fighter.

Executed over the Point Mugu Sea Test Range, the event marked the first successful launch-to-eject communications sequence by the F-35 and AIM-120.

The duo also fired the rocket motor after launch, which is expected to provide direction for targeted launches in support of the Block 2B fleet release capability later this year.

Moving into weapons test is among the major steps towards delivering Block 2B software capability.

"They’ve worked thousands and thousands of hours to get to the point where we are today. It’s fantastic to see that it’s all paid off. We’re rolling into a lot of additional weapons work in the coming months to put that expanded capability on the aircraft," Schwartz added.

With ten weapon stations in place, the F-35A conventional takeoff and landing aircraft has been developed to carry a payload of up to 18,000 pounds.

With ten weapon stations in place, the F-35A conventional takeoff and landing aircraft (CTOL) has been developed to carry a payload of up to 18,000 pounds.

By December 2016, when the target date for F-35A initial operating capability ends, the US Air Force plans to field an operational squadron with 12 aircraft.

It also expects to have trained airmen by then to perform basic close air support, interdiction and limited suppression, alongside destructing air defense operations of enemies in a contested environment.

F-35 weapons director Charlie Wagner said: "This event is the result of tremendous effort and collaboration in the F-35 Enterprise, and marks a turning point in F-35 capabilities; the AIM-120 launch is one small but critical increment toward proving combat capability."

Its three variants are said to replace the A-10 and F-16 for the US Air Force, the F/A-18 for the US Navy, the F/A-18 and AV-8B Harrier for the US Marine Corps and several other fighters for various countries.