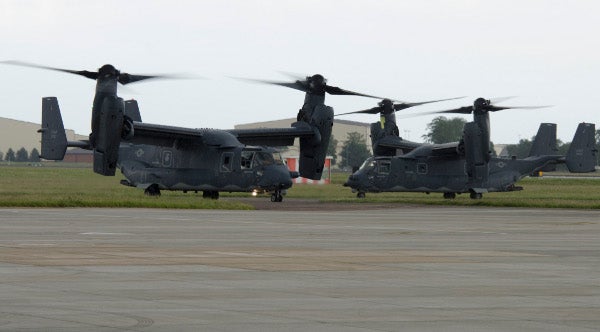 The aircraft form part of the 352nd SOG expansion, which include the addition of ten Ospreys by the end of 2014.

Replacing the MH-53 Pave Low helicopter, the CV-22 aircraft not only has the vertical takeoff, hover and vertical-landing qualities of a helicopter, but also has the long-range, fuel-efficiency and speed qualities of turboprop aircraft.

In addition, the aircraft is silent in airplane mode, allowing it to operate easily in hostile territory.

"The arrival of the new aircraft is the next chapter in a 70-year historical relationship the US and the UK share."

The addition of CV-22B to the 7th Special Operations Squadron (SOS), a component of the 352nd SOG, enables the unit to quickly handle operations across greater distances.

"The unique thing about the CV-22, unlike our rotary wing partners, is it has the speed of a fixed wing platform," he added.

"So you kind of get the blend of the best of both worlds. You have the speed of a fixed wing, and you have the vertical lift capability of a helicopter."

352nd SOG commander colonel Christopher Ireland said: "The arrival of the new aircraft is the next chapter in a 70-year historical relationship the US and the UK share."