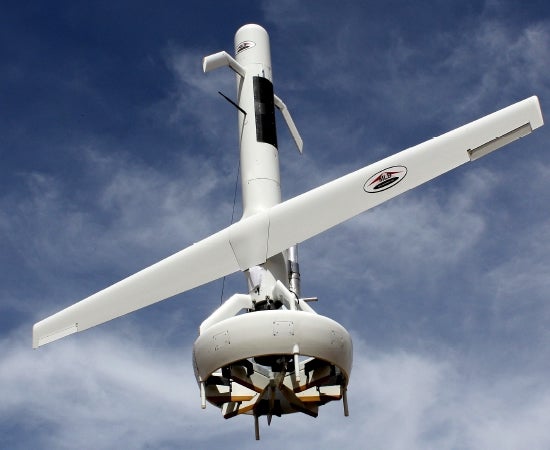 A team of MLB, AAI Unmanned Aircraft Systems and Brigham Young University has been selected by the US Air Force (USAF) for the development of a long-endurance vertical takeoff and landing (VTOL) Tier II-size unmanned aerial vehicle (UAV), the V-BAT.

Under the terms of the USAF’s Phase II small business innovation research (SBIR) contract, the team will make use of the MLB V-Bat VTOL UAV’s design to develop a new drone.

The USAF is seeking development of an air vehicle with a wingspan of 8ft, ten hours of endurance, 55lbs gross take-off weight and a maximum cruising speed of 70m/h.

MLB will manufacture the UAV and also conduct a detailed flight test programme for the V-Bat during all phases of flight, following which fully autonomous operational demonstrations will be performed.

Brigham Young University will oversee development of control algorithms and supporting flight tests, while AAI will be responsible for advancing the UAV’s design for low-rate initial production (LRIP) and refining requirements through customer engagement.

Featuring the V-Bat’s combination of VTOL operational flexibility, safety offered by a shrouded fan and fixed wing duration, the newly developed UAV is expected to change the availability and use of local situational awareness for conducting UAV operations from restricted areas.

MLB has also successfully demonstrated accurate positioning of small payloads by a hovering V-Bat drone under a vision-based control system in 2011, as part of a US Defense Advanced Research Projects Agency’s (DARPA) contract.

Initially requested for aerial mapping by a commercial customer, the V-Bat design has been selected more recently by customers from several government agencies and by commercial groups eyeing an anti-piracy solution.

The V-Bat UAV is currently on display at the Association for Unmanned Vehicle Systems International (AUVSI) show, being held in Las Vegas, US, from 7-9 August, 2012.

Image: V-Bat is a a long endurance VTOL design under development at MLB. Photo: courtesy of MLB Company.