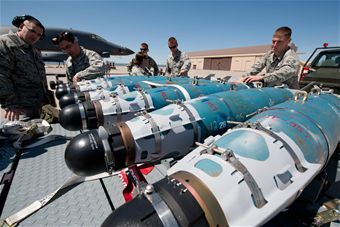 During the exercise, conducted at Hill Air Force Base, Utah, US, B-1 Lancer aircrews used six 500lb GBU-54 L JDAMS to strike against moving targets on the Utah Test and Training Range.

Conducted to evaluate the complete process of handling, the precision guided munitions from the beginning to the end, the exercise also validated the munitions and other advanced air to ground weapons’ effectiveness, maintainability, suitability and accuracy.

The 37th BS commander Lieutenant colonel, Stuart Newberry, said: "Combat Hammer provided us with the unique opportunity to employ weapons in real-world scenarios and evaluate the weapon and aircraft-to-weapon interface in great detail due to the telemetry kits on the weapons.

"This data, when coupled with scenarios usually unavailable to us except in combat scenarios, provides us with an opportunity to validate and refine our tactics, techniques and procedures … as well as adjust training plans and combat standards.

"Evaluators will be able to retrieve data from the telemetry kits on the weapons and build a picture of how the weapon was or was not affected in various scenarios.

"That data is invaluable in refining and adjusting our training plans."

The Combat Hammer team also conducted combat situations such as slowing down or speeding up moving targets, GPS jamming and then attempts to replicate them during the exercises.

Integrated with laser seeker, the dual-mode guided weapon LJDAM is capable of providing outstanding accuracy and can be used to engage both stationary and moving targets on the ground.