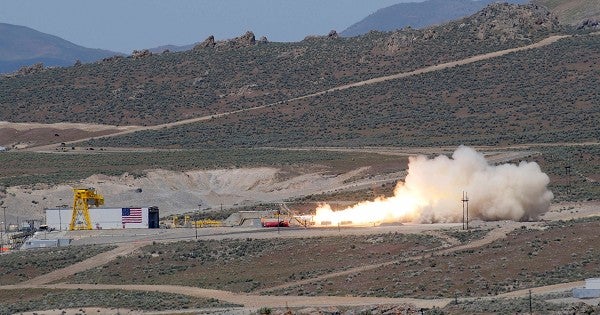 The US Air Force (USAF) has successfully evaluated Alliant Techsystems’ (ATK) newly built Large Class Stage I (LC I) solid rocket motor at its test facilities in Promontory, Utah, US.

Indicating collection of all channels of data, the preliminary test results also confirmed that the rocket performed according to predictions.

"Our design also maximises the use of common materials and processes that improve affordability and reduce production lead times," Lehr added.

Manufactured as part of the air force’s Large Class Stage I programme, the 92in diameter rocket leverages emerging technologies from other air force’s developmental programmes, such as the Propulsion Application Program and Integrated High Payoff Rocket Propulsion Technology.

Conducted under the intercontinental ballistic missile demonstration / validation propulsion applications programme funding, the LC I programme is aimed at maturation and demonstration of applicability of available technologies in a large class solid rocket motor and a potential family of motors capability for future propulsion systems.

The capability will in turn facilitate assembly of an array of current rocket motors to address future mission requirements at a fraction of the cost of manufacturing new propulsion systems for each operation, eventually helping USAF lower the future development costs.

The rocket’s development was managed by the Air Force Nuclear Weapons Center, and its thrust vector control system, designed to have common hardware for future use on other company motors, was manufactured by Moog.