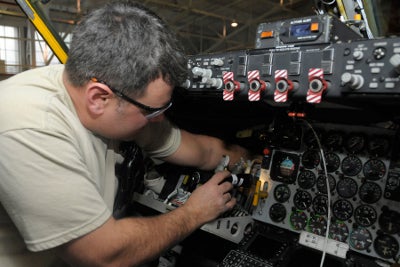 The US Air National Guard is set to test a prototype of the large aircraft infrared countermeasure system (LAIRCM), also known as the Guardian, on Boeing KC-135 Stratotanker aircraft at an undisclosed air force test range.

In collaboration with the KC-135 Systems Project Office (SPO) at Tinker Air Force Base, Oklahoma, the new prototype missile countermeasure device is being installed on aircraft at Selfridge Air National Guard Base, Michigan, US.

As part of the testing, the KC-135 has been modified to include a receiving plate, an additional antennae and wiring inside it for accommodating the LAIRCM pod.

Details about when the testing will start have not been revealed, although, it is expected the prototype testing may conclude by late spring or early summer this year.

Michigan Air National Guard 127th Wing commander and Selfridge KC-135 pilot colonel Michael Thomas said that the testing was crucial not only to the air force, but also to the nation’s army, navy, Marine Corps and allied partners.

"The work being done by our airmen on this project will have a direct impact on the future safety of not only aircraft, but the airmen, soldiers, sailors and Marines aboard those aircraft," Thomas added.

The 190th Air Refueling Wing in Kansas, US, started initial testing of the LAIRCM in 2010.

The US Navy is also simultaneously testing a similar LAIRCM prototype on C-40 Clipper cargo aircraft.

Image: The KC-135 being modified for testing the new aircraft defence system prototype. Photo courtesy of US Air Force, photo by Brittani Baisden.