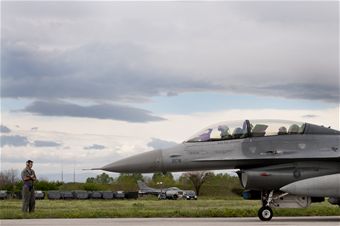 The US and Bulgarian Air Forces have successfully completed Thracian Star 2012, an exercise intended to enhance the relationship and interoperability between Nato allies, at Graf Ignatievo Air Force Base, Bulgaria.

The allied nation’s pilots also conducted ride-along flights in their counterpart’s jets to gain insight into the differing aircraft capabilities and pilot tactics.

Commander lieutenant colonel Michael Thompson, of 510th Fighter Squadron, said: "As a NATO partner, we could be called upon to fight in a conflict together and knowing how each other trains and fights gives a little bit of insight into how would we integrate, and how would we be interoperable as a combined force."

The US forces worked closely with their counterparts to increase interoperability between pilots, maintainers, joint terminal air controllers, firefighters and security forces through phone systems, radios and mobile devices.

Image: A 510th Fighter Squadron pilot prepares to take-off at Graf Ignatievo Air Base, Bulgaria, as a part of Thracian Star 2012. Photo: courtesy of the US Air Force.