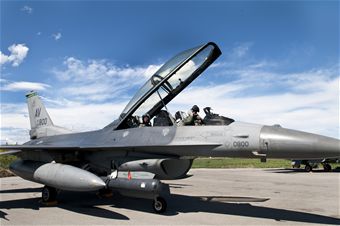 The US and Bulgarian Air Forces are jointly conducting the exercise Thracian Star 2012, aimed to strengthen the bilateral relationship and to increase interoperability between Nato allies at Graf Ignatievo Air Force Base, Bulgaria.

555th FS F-16 pilot Captain Bryan Faughn said: "We are performing the same mission sets we do at home station, but we are integrating the Bulgarian pilots into the training."

Pilots will also conduct ride-along flights in the counterpart’s jets to gain insight into both the tactics of the pilots and the capabilities of the different aircraft.

During the exercise, US forces will work closely with their Bulgarian counterparts to increase interoperability between pilots, maintainers, joint terminal air controllers, firefighters and security forces Airmen.

The Bulgarian base commander Brigadier general Tsanko Stoykov said that: "Bilateral training is important for us at Graf Ignatievo because it gives us a chance to implement new tactics and procedures and increase our combat capabilities."

"It also gives us a chance to improve our interoperability with our NATO allies and partners," Stoykov added.