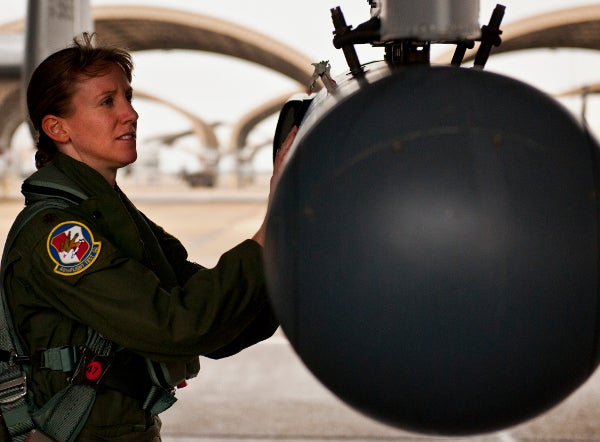 The US Air Force (USAF) has completed its testing of a flying wireless router that will enable targeting pods installed on fighter aircraft to serve as a communications relay for ground forces at Eglin Air Force Base (AFB) in Florida, US.

Validated since October 2012 by pilots from the 40th Flight Test Squadron (40th FLTS), the router is a a new software upgrade designed for Litening and Sniper advanced targeting pods mounted on all legacy fighters and the B-1B Lancer bomber.

40th FLTS and Net-T project test engineer captain Joseph Rojas said: "This is a new capability the air force does not currently deploy with and it has not been tested until now."

ROVER-5 is a small arm-mounted touchscreen device and until now has only been able to send and receive data from a nearby aircraft.

"The router is a a new software upgrade designed for Litening and Sniper advanced targeting pods."

Net-T is expected to provide the commander with an ability to transmit real-time information videos, images, maps, coordinates or any file type from forward deployed elements, without relying on satellite, radio or other traditional forms of communication.

The testing also sought to discover distance limitations of the flying hub, as well as the maximum distance at which the ROVER-5 can send and receive information.

A total of five stations were set up at Eglin test range for relay of several files of various types and sizes back and forth, using Net-T on a wide range of pods and aircraft, including B-1B, F-16 Fighting Falcon and F-15E aircraft.

Resulting data will be sent to the Precision Attack Systems Program Office by the middle of February 2013, following which the software will return to Eglin AFB for operational testing in anticipation of planned entry into service in 2014.

Image: Examination of the Litening II pod mounted on an A-10 Thunderbolt aircraft prior to starting Net-T testing. Photo courtesy of US Air Force photo/Samuel King Jr.