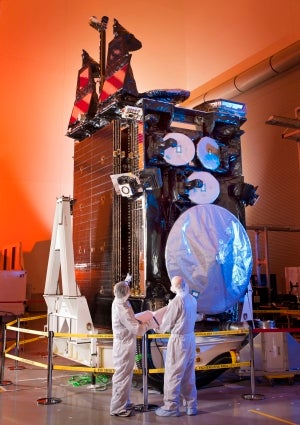 The AEHF satellite has been transferred aboard a C-5 Galaxy aircraft for its final preparations of scheduled launch, aboard an Atlas V launch vehicle on 27 April 2012.

Developed by Lockheed, the AEHF satellite is the most technologically advanced military communications satellite to date.

The next-generation military strategic and tactical relay system consists of a ground mission control centre and user terminals, while the payload consists of processors, antennas, radio frequency subsystems and crosslink.

The AEHF will also provide the critical survivable, protected and endurable communications to the National Command Authority including presidential conferencing in all levels of conflict.

Lockheed is currently building four AEHF satellites and the mission control segment and has started long-lead components procurement for the construction of fifth and sixth AEHF satellites.

The first satellite, USA-214, was successfully launched by an Atlas V 531 rocket from Space Launch Complex 41 at the Cape Canaveral Air Force Station, Florida, US on 14 August 2010.