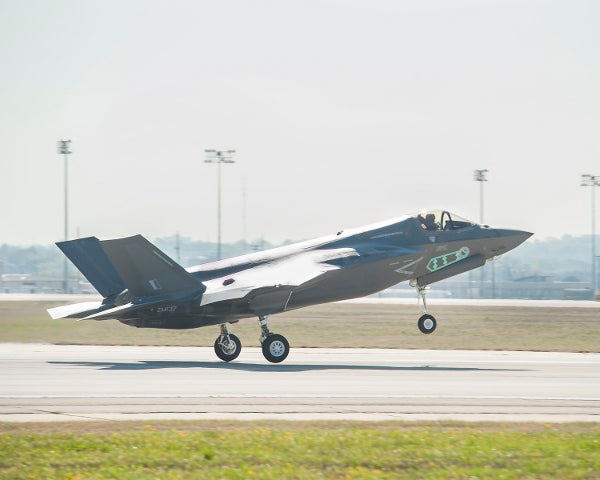 Lockheed Martin has conducted the first operational flight of the UK Ministry of Defence’s (MoD) third F-35B Lightning II Joint Strike Fighter (JSF) at the Naval Air Station Fort Worth Joint Reserve Base in Texas, US.

Designated ZM137, the aircraft is now scheduled to undergo a series of company and government checkout flights prior to actual delivery to the MoD this year.

The aircraft will join two previously delivered aircraft, ZM135 and ZM136, for the US-led pilot and maintainer training at Eglin Air Force Base (AFB) in Florida, US, in late 2013.

An initial batch of three F-35 short take off and vertical landing (STOVL) variants were purchased by the MoD for test and evaluation for an estimated cost of more than £300m, to help replace its Harrier GR9 aircraft, which retired from service in 2010.

The MoD announced plans to order a fourth aircraft for pilot training purposes in July 2012.

Deliveries of the first two aircraft were completed last year, while delivery of the fourth is scheduled to take place during 2015-2016, as reported by Defense News.

Dubbed the most advanced aircraft of the British armed forces, the F-35B STOVL aircraft is scheduled to be jointly operated by the Royal Air Force from its base in Marham, Norfolk, and the Royal Navy. The aircraft will operate from the Navy’s Queen Elizabeth Class aircraft carriers, which are currently under development, from 2020.

Lightning II will be jointly operated by the Royal Air Force and the Royal Navy and the aircraft will operate from the Navy’s new Queen Elizabeth Class aircraft carriers as well as from RAF Marham.

A total of 48 stealth and intelligence, surveillance, target acquisition and reconnaissance (ISTAR) technology-equipped F-35B jets are intended to be acquired over the next ten years as part of the Joint Combat Aircraft programme.

Front-line deliveries are expected to start from 2015, followed by initial operating capability from land in 2018, and flights from HMS Queen Elizabeth later that year.