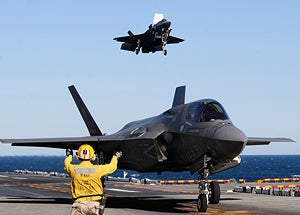 The UK Government has completed a U-turn over which F-35 variant it plans to order for the Royal Navy’s new Queen Elizabeth class aircraft carrier.

UK Prime Minister David Cameron has signed off on the decision to adopt the jump-jet variant of the F-35 Lightning Joint Strike Fighter, reverting back to the original decision made by the Labour government before the coalition came to power in May 2010.

The coalition had wanted to switch to the F-35C variant, which would require additional equipment to be fitted aboard the Royal Navy’s future generation aircraft carriers.

The U-turn comes as concerns were raised about spiralling costs for the project related to catapults and arrester gear, with some estimates placing the additional equipment cost at as much as £2bn.

Instead, the Royal Navy will now be receiving the F-35B variant, which is the short take-off and vertical landing variant of the Joint Strike Fighter.

Delays in the development of the F-35C variant will also have had a significant impact on the decision, with the aircraft now not expected to be ready until 2023 at the earliest.

Shadow defence secretary Jim Murphy ridiculed the government for its decision to revert to the original choice.

"This is a strategically vital element of the equipment programme on which our security and thousands of jobs depend and yet ministers have treated it with hubristic incompetence, wasting hundreds of millions at a time of painful defence cuts," added Murphy.

Former Liberal Democrat leader Sir Menzies Campbell continued the criticism. "[It is an] eloquent demonstration of what is seriously wrong with UK defence procurement," he said.