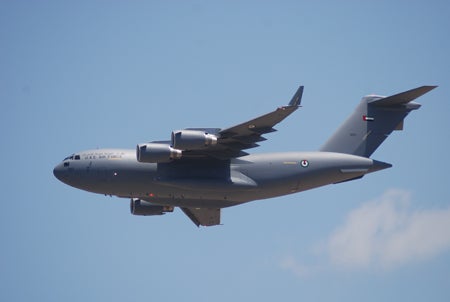 The delivery follows a contract awarded to Boeing for the supply of four C-17s in 2011 and two in 2012, as well as to provide complete C-17 related sustainment activities, including material management and depot maintenance support.

Boeing Airlift vice president and C-17 programme manager, Bob Ciesla, said: "It’s amazing to see all that the UAE has accomplished with its fleet of C-17s in such a short time, including standing up a new base; qualifying three aircraft commanders and four mission-ready loadmasters; and conducting humanitarian aid and peacekeeping missions."

The UAE Air Force and Air Defence C-17 fleet has transported more than 3,000 passengers and nearly 4m lbs of cargo since 2011.

The sixth C-17 aircraft is scheduled to be delivered to UAE in 2012.

The Boeing C-17 Globemaster III is a large military transport aircraft designed to perform missions such as rapid strategic airlift of troops and supplying palleted cargo to main operating bases or forward operating bases throughout the world.

The C-17 airlifter can also be configured to carry out additional tasks that include tactical airlifts, medical evacuation and airdrop missions as well as to help with humanitarian and disaster relief efforts.

The airlifter can transport large payloads without refuelling, operate in rough weather and land on runways as short as 3,000ft.

Apart from serving the air forces of the US, Australia, India, Canada, Qatar, UAE, the aircraft is also widely operated by the 12-member Strategic Airlift Capability initiative of Nato and Partnership for Peace nations.