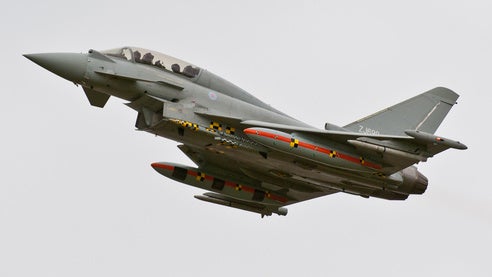 Pilots from each of the Eurofighter consortium’s member nations have successfully completed Typhoon cockpit assessment trials, aimed at evaluating the aircraft’s ability to incorporate the Meteor beyond visual range air-to-air missile (BVRAAM), at BAE Systems’ Warton facility in Lancashire, UK.

During the trials, the pilots conducted multiple exercises in a Typhoon simulator, which has been reconfigured to incorporate Meteor weapon functionality, with support from a team of engineers.

According to BAE Systems, the trials were successful and provided a series of recommendations for the Typhoon’s final cockpit design.

Steve Long, a BAE Systems test pilot, said the trials involved multiple scenarios that ensured the new capability has been designed in compliance with the operators’ perspective.

”One of the most important things to consider when integrating a new missile is to make sure that from a pilot’s perspective it is intuitive to use. In a combat environment there is no room for failure. It has to be intuitive; it has to be fool proof,” Long added.

When questioned about the capability that Meteor will offer for the future Typhoon pilots, Long explained: ”Meteor is an incredibly important capability enhancement for Typhoon. Having Meteor sat under your wings means you’re stepping into an aircraft that instantly gives you the confidence and reassurance to conduct your mission.”

Developed by MBDA, the Meteor is an active radar guided BVRAAM designed to provide Typhoon with a multi-shot capability against a wide range of long-range targets in a heavy electronic countermeasures (ECM) environment.

Development on the missile will be completed in 2013, and the first missile is scheduled to enter service with the UK Royal Air Force’s (RAF) Typhoons in 2015.

Future of the Iraqi Defense Industry – Market Attractiveness, Competitive Landscape and Forecasts to 2020

Future of the Philippines’ Defense Industry – Market Attractiveness, Competitive Landscape and Forecasts to 2021

Future of the Kuwaiti Defense Industry – Market Attractiveness, Competitive Landscape, and Forecasts to 2020

Future of the Omani Defense Industry – Market Attractiveness, Competitive Landscape and Forecasts to 2020