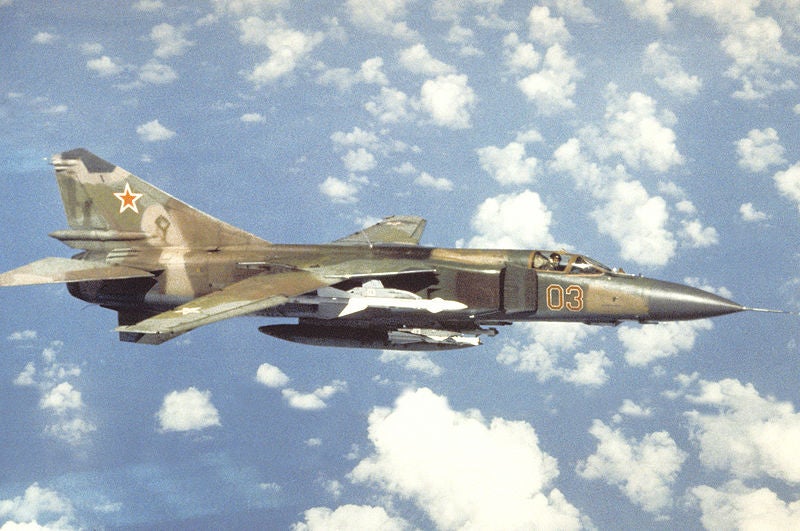 A Russian-built MiG-23 fighter jet belonging to the Syrian Air Force has crashed near the Iraq border amidst claims it was shot down by the Free Syrian Army (FSA).

State media has refuted the claims made by the FSA, alleging that the aircraft crashed due to technical problems, forcing the pilot to eject. A search for the pilot is currently under way.

Syria state-run news agency Sana has said that the aircraft had been conducting a routine training mission before it encountered a fault with its control mechanisms. The FSA has countered the official account, claiming one pilot to have died in the crash whilst the other has been captured.

Video footage has been provided by the rebels, showing an MiG-23 fighter jet bursting into flames while anti-aircraft fire can be heard in the background. The footage would support claims that anti-aircraft weapons had reached rebels in Syria as President Bashar al-Assad’s regime looked to use the nation’s array of aerial assets to its advantage.

The Syrian Air Force’s fleet of MiG-23 Flogger Fighter Bombers, acquired from Russia, is one of the largest in the Syrian Air Force. The nation is thought to possess approximately 140 MiG-23s, comprising of first and second generation aircraft as well as the ground attack MiG-23BN variant.

The Assad regime has been utilising its aerial assets in recent weeks as the conflict within the nation shows little sign of abating. Fighting has escalated following a suicide bomb attack which killed four members of Assad’s inner circle, with fighters taking to the skies to repel rebels that had taken areas of the capital Damascus and second city of Aleppo.

Image: Syria has acquired a number of MiG-23 Flogger Fighter Bombers from Russia. Image courtesy of the US DoD.