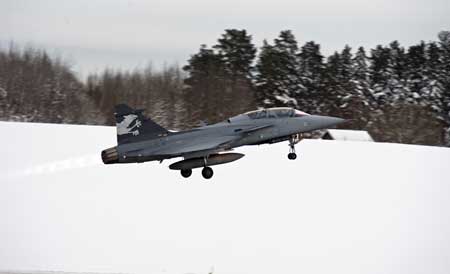 Saab has been awarded a follow-contract by the Swedish Defence Materiel Administration (FMV) for development work on the JAS 39 Gripen E multirole combat aircraft.

Representing second order under the original SEK47.2bn ($7.4bn) agreement signed between the company and FMV in February 2013, the SEK10.7m ($1.64M) award covers definition and development work, alongside adaptation of test and trial equipment, simulators and rigs, during the 2015-2023 timeframe.

The initial SEK2.5bn ($0.39bn) contract for starting development and modification of Gripen E for Swedish Air Force was secured by the company last month.

Saab president and CEO Hakan Buskhe said the latest contract is strategically important and holds great significance for both the company and the aircraft.

"The agreement with FMV covers production and delivery of Gripen E aircraft to both the Swedish and Swiss air forces."

"Gripen is one of the most modern fighter aircraft systems and through this development order, and the expected modification order from Sweden, we have a strong competitive advantage when we now increase our efforts on the export market," Buskhe added.

The agreement with FMV covers production and delivery of Gripen E aircraft to both the Swedish and Swiss air forces, if the acquisition is approved by the country’s parliament.

Initial Gripen E deliveries to the Swedish air force are scheduled to start in 2018 and run through to 2026.