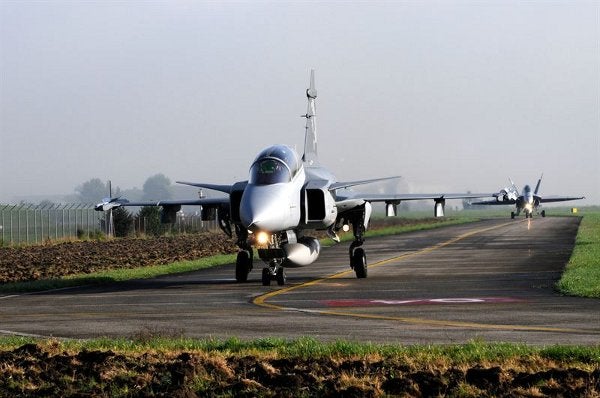 The Swedish Defence Materiel Administration (FMV) has signed an agreement with Saab for development work on the JAS 39 Gripen E multirole combat aircraft.

With a combined value of SEK47.2bn ($7.4bn), the agreement covers production and delivery of Gripen E aircraft to the Swedish and Swiss air forces.

The company also received a SEK2.5bn ($0.39bn) contract to start development and modification of Gripen E from Sweden during a 2013-2014 timeframe, and is awaiting receipt of a SEK10.6bn ($1.6bn) follow-on development contract from the country in the first quarter 2013.

Saab president and CEO Hakan Buskhe said the agreement creates more opportunities for Gripen to export in the future.

"Our existing customers that operate the Gripen C/D version will also be able to take advantage of some of the development in their future upgrades," Buskhe added.

"The agreement covers production and delivery of Gripen E aircraft to the Swedish and Swiss air forces."

Saab business area Aeronautics head Lennart Sindahl said: "With this agreement we continue to develop the successful Gripen concept with our own innovative and unique design as well as our own software combined with sub-systems from different suppliers around the world."

Initial deliveries of Gripen E aircraft to the Swedish Air Force are scheduled to start in 2018 and run through to 2026.

As part of the agreement, the company will also supply 22 new Gripen E/F aircraft, along with related equipment to the Swiss Air Force, if the procurement is approved by the country’s parliament.