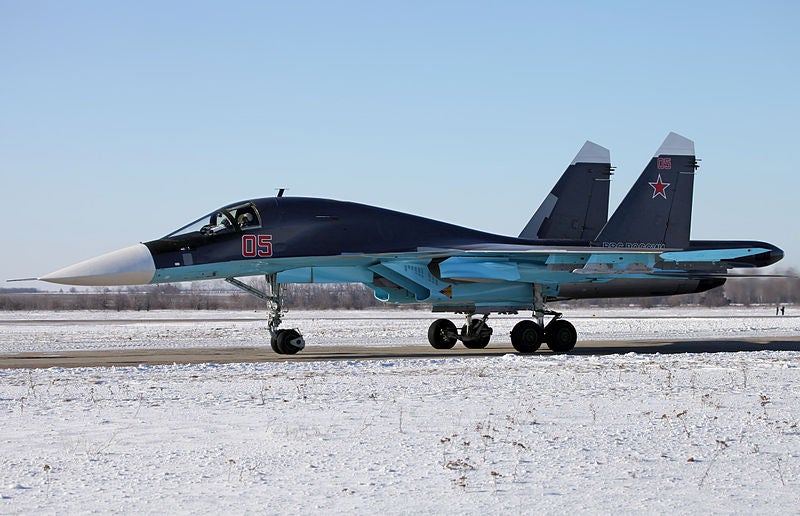 Sukhoi has handed over an additional batch of Su-34 multi-role frontline bomber aircraft to the Russian Air Force (RuAF) during a ceremony at the Novosibirsk aircraft plant in Russia.

Comprising three aircraft, the new batch represents the second to have been delivered by the company as part of the country’s 2013 state defence order.

Transferred in May this year the first batch, featuring three serial production aircraft, is already operational with the RuAF.

Powered by two Lyulka AL-31FM1 turbofan engines, the Su-34 is a 4+ generation aircraft and is designed to engage in a broad spectrum of land-based, sea and airborne targets in all weather conditions and any visibility levels, using a range of airborne munitions, including high-precision types.

The aircraft is a two-seat derivative of the swing-wing Su-27 fighter, retaining its basic layout and construction. However it also features increased takeoff weight and an advanced multimode-phased array radar with terrain following and terrain avoidance modes.

"The aircraft is a two-seat derivative of the swing-wing Su-27 fighter, retaining its basic layout and construction."

Additional features include a long-range aiming system, a modern on-board communication and an information exchange system, a complex survival system, an armoured cockpit and an active safety system, along with new computers to manoeuvre and perform precise bombing when under enemy attack.

Russia has already taken delivery of 12 fighter-bombers, as part of a five-year contract signed in 2008 for the supply of 32 aircraft.

Approximately 92 fighters were ordered by the Russian Ministry of Defence (MoD) under a $3.3bn deal in March 2012, as part of the 2011-2020 State Armaments programme, which aims to replace the air force’s existing Su-24 Fencer all-weather attack aircraft fleet.