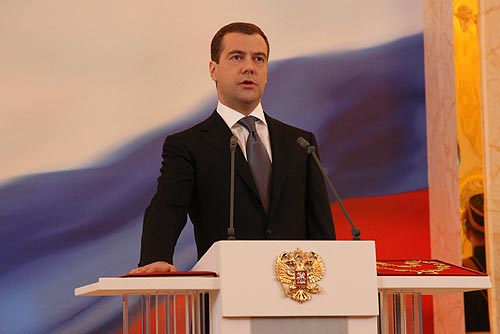 The Russian Air Force’s plans for the development of a new, fifth-generation strategic bomber aircraft will move ahead, Russian Prime Minister Dmitry Medvedev has confirmed.

Medvedev confirmed the plans at a staff meeting on strategic aviation in Kazan, Central Russia, citing the need for improvement in the maintenace and upgrade of Russia’s strategic bombers.

"Alongside a fifth-generation fighter there are also plans to develop an advanced long-range aviation complex. I am talking about a new strategic bomber," Medvedev said.

The necessity of such an aircraft, however, has been constantly questioned by some military experts, claiming that the availability of modern air defence and missile defence systems could render the aircraft redundant.

Medvedev also said that Russian Armed Forces should be armed with new equipment at no less than 30% in the next three years, followed by up to 70% in another five years, according to reports from the Kremlin press service.

"There is just one key requirement for the national defence and industrial manufacturers – [for] the national armed forces to be supplied with advanced, reliable and quality machines," the Prime Minister added.