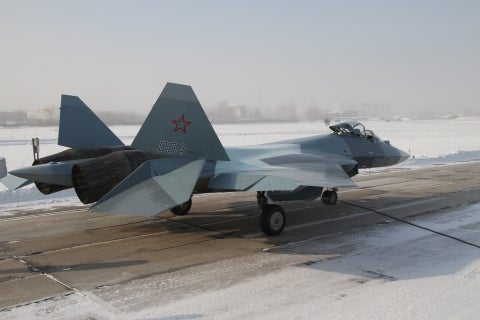 The aircraft made multiple intermediate stops while travelling from the Komsomolsk-on-Amur facility to the airport at the M.M. Gromov Flight Research Institute in Zhukovsky, near Moscow, without showing any impact on engines, systems or equipment performance.

The initial test flight of the fifth-generation aircraft was conducted at Sukhoi’s KnAAPO aircraft plant in Komsomolsk-on-Amur in December 2012, during which the aircraft flew for 40 minutes and landed on the factory runway, demonstrating its capability in all phases of the planned flight programme.

The test flight also evaluated the aircraft’s stability, the power plant system’s performance and reliability and the safe operation of all systems and components.

Powered by two Saturn-Lyulka 117S turbofan engines, the multirole fighter is equipped with radar-evading stealth technology and can also perform supersonic flights at speeds of more than 2,000km/h and in-flight refuelling missions.

The 18,500kg aircraft features short take-off and landing capabilities and is also capable of achieving a low radar visibility and heat signature.

A total of four T-50s have undergone flight tests since the initial test flight of the first prototype in January 2010, whereas the fifth is currently under production at the Komsomolsk-on-Amur factory.

The aircraft is set to undergo state trials in March 2013, while its entry into operational service with the Russian air force, which intends to acquire 60 aircraft, is planned for 2015.