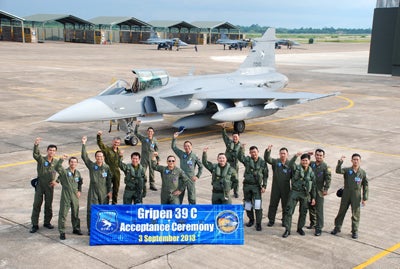 Despite the aircraft departing Sweden on 30 August, the delivery was delayed after one of the aircraft was struck by lightning over the Indian Ocean, and was forced to make an emergency landing in India, The Nation reports.

Thai Air Force spokesman air vice-marshal Monthon Satchukorn was quoted by the news agency as saying that the aircraft had stopped for scheduled fuelling and some of the parts in the lightning-struck aircraft were changed.

The aircraft will be thoroughly checked by air force mechanics before entering operational service, Satchukorn said.

The initial batch of three aircraft was delivered in February 2011.

Thailand had also placed orders for six JAS 39 aircraft, including two C-models and four D-models, along with a Saab 340 system, Saab 340 transport, simulators, and a comprehensive logistic support and training package for Thai pilots and technicians in February 2008, with deliveries commencing in 2011.

Defense and Civil Spends on Helicopters in Malaysia: 2016 to 2024