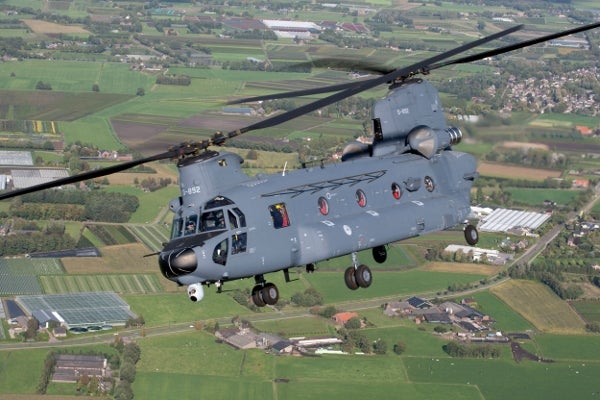 The Royal Netherlands Air Force (RNLAF) has taken delivery of its first two CH-47F Chinook heavy-lift helicopters under contract from the country’s Defence Materiel Organization (DMO) at Gilze-Rijen air base in Noord-Brabant, Netherlands.

The delivery follows a deal signed with Boeing in February 2007 for the supply of six helicopters along with support services to help expand the air force’s operational Chinook fleet to 17.

Out of the six new Chinooks, two will replace helicopters lost during operations in Afghanistan, while the remaining four will add to the RNLAF’s existing fleet of 11 CH-47D Chinook helicopters.

Dutch Air Force commander lieutenant-general Sander Schnitger said the advanced Chinooks meet all of the air force’s requirements and will serve as a huge improvement for its entire helicopter fleet.

Three helicopters are scheduled to be operated by RNLAF’s 298 Squadron from Soesterberg Air Force Base, while the other three will be stationed at US Army’s Fort Hood post in Texas, US, for training purposes.

A training facility was also established by the air force at the School of the Air-Ground Cooperation in Schaarsbergen, to train personnel in CH-47F flying operations.

The helicopters are also used by the US, British and Australian armies as well as the Royal Canadian Air Force.