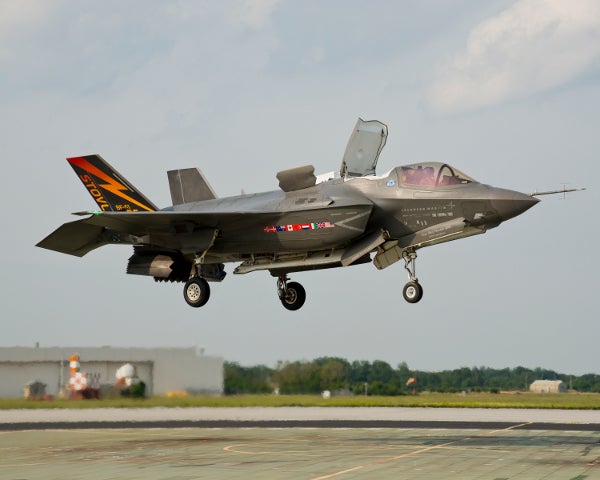 Flown by squadron leader Jim Schofield, the aircraft – designated BF-1 – approached the landing area at a speed of 150mph, before making a gentle landing on the tarmac during the testing on 28 May, The Telegraph reports.

Commenting on the F-35B’s handling capabilities, Schofield said the aircraft has revolutionised STOVL flying compared to the conventional Harrier aircraft, which challenged pilots during landing onto a hover pad or ship.

”Now with F-35B, at the press of a button the aircraft transforms into ‘short take-off or vertical landing’ mode whereupon the aircraft can take off or hover hands-off,” Schofield added.

”This means pilots will require less training and operating the aircraft will be much safer than legacy types.”

Primarily designed for use by the US Marine Corps and international partners in the UK and Italy, the F-35B is designed to conduct STOVL sorties to facilitate air power projection from amphibious ships, ski-jump aircraft carriers, and expeditionary airfields.

Currently undergoing flight test and evaluation at NAS Patuxent River and Edwards Air Force Base in California, and supporting aircrew training at Eglin Air Force Base in Florida, US, the aircraft is scheduled to achieve initial operational capability in 2015.

To date, Britain has taken delivery of two F-35B aircraft from manufacturer Lockheed Martin, both of which are currently stationed at Eglin AFB for pilot training programmes.

Dubbed the most advanced aircraft of the British armed forces, the F-35B jet is scheduled to be jointly operated by the RAF and Royal Navy from the Queen Elizabeth Class aircraft carriers, which are currently under development, and RAF Marham in Norfolk, UK, from 2018.