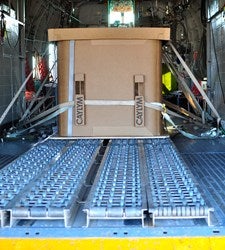 The delivery follows the system’s joint evaluation and certification by C-27J Spartan manufacturer, Alenia Aermacchi and the air force in November 2012.

”When the final units arrive, we will be sending our training team over to Romania to conduct expanded training with both ground and air crews,” Goddard said.

Caylym Technologies sales and marketing team head Garrett Miller said the system does not require aircraft modification to counter wildfires, and requires no additional training for operation as a majority of the crews are already trained on container delivery system (CDS) dropping techniques.

”Many of these countries recognise that they already operate aircraft that can immediately begin to serve in the effort to fight these deadly wildfires,” Miller said.

"The system will be locally used by the air force to help support the EU’s aerial firefighting mission."

”We are currently in talks with two major cargo aircraft manufacturers and several individual countries on certifying our system to be used on their aircraft to combat wildfires.”

Manufactured and assembled in the US from biodegradable/recyclable materials, the Guardian is a crate-sized paper water container designed to safely and accurately take down wildfire blazes that threaten homes and communities worldwide.

Each container holds more than 260gal of water or retardant, and around six to sixteen units can be successively dropped from the rear ramp of the aircraft depending on the aircraft type, subsequently opening in mid-air to create a soaking rain that effectively covers the target.

The patented container can be safely and accurately dropped from 800-1,000ft above the ground by an array of rear-loading cargo aircraft.