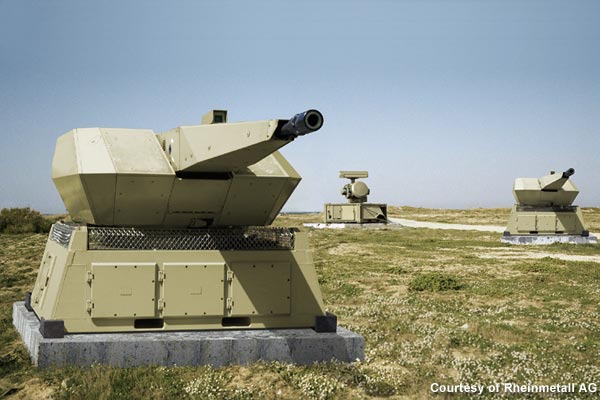 The weapon system is scheduled to be deployed with the 1st air defence squadron (Flugabwehrraketengeschwader 1), based at Husum, Germany, after the air force assumed responsibility for all national air defence and anti-aircraft missions from the German Army in August 2010.

Rheinmetall Defence executive board member Bodo Garbe said: ”It is a highly effective system, capable of countering a wide array of threats in future operational scenarios. Moreover, its open architecture design makes it a future-proof investment.”

The system was specifically developed to protect the army’s forward-operating bases in Masar-I-Sharif and Kunduz, Afghanistan, from rocket, artillery and mortar attacks.

Equipped with six 35mm automatic guns, two sensor units and a central command ground-control unit, the system is capable of recognising missiles fired onto a base from approximately 3km, enabling the gun to instantly destroy threats in a calculated flight path.

The gun’s firing is based on Rheinmetall Weapons and Munitions- developed mission-specific programmable and air burst advanced hit efficiency and destruction (AHEAD) ammunition, which has a payload of 152 tungsten projectiles.

Mantis can also be used to protect national territory and allied nations during conflict and post-conflict situations and also in military operations other than war (MOOTW).