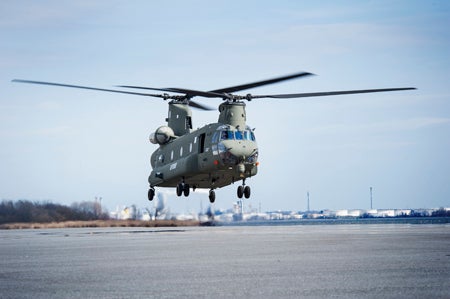 Carried out ahead of the original schedule, the test flight confirmed initial airworthiness for the Mk6 Chinook helicopter.

UK Defence Equipment & Support Chinook team leader captain David Childs said the completion of the first test flight less than 20 months after contract signature represents an achievement for both the company and the project team.

A total of 14 Mk6 Chinook helicopters were ordered by the UK Ministry of Defence (MoD) to help enhance the RAF’s existing heavy-lift helicopter capability under a £1bn contract from Boeing in August 2011.

Awarded as part of the UK’s strategic helicopter vision to modernise its rotor-craft force structure, the contract brought the country’s overall number of Chinooks to 60.

The helicopters will feature a new monolithic airframe with UK-specific avionics, forward-looking infrared radar, aircraft defensive systems, interoperable communication and navigation equipment, as well as a digital flight control system, improving their ability to operate in the hot and dusty environments found in Afghanistan.

Currently undergoing comprehensive testing in Mesa, Arizona, US, the first helicopter is scheduled for delivery to RAF in late 2013.

An initial batch of three helicopters is expected to be ready for operational deployment in early 2015, while full operational capability of all 14 Chinooks is scheduled in early 2017.

RAF’s existing fleet of 46 Mk2/Mk3 Chinooks is currently being upgraded by Boeing into the Mk4/4A and Mk5 configuration, as part of the MoD’s Julius programme.

The Mk2 and Mk3 fleet modifications are scheduled to complete in early 2015 and 2016 respectively.

Image: The Royal Air Force’s first Mk6 Chinook during its initial test flight at Boeing facility near Philadelphia, US. Photo: Courtesy of Boeing.