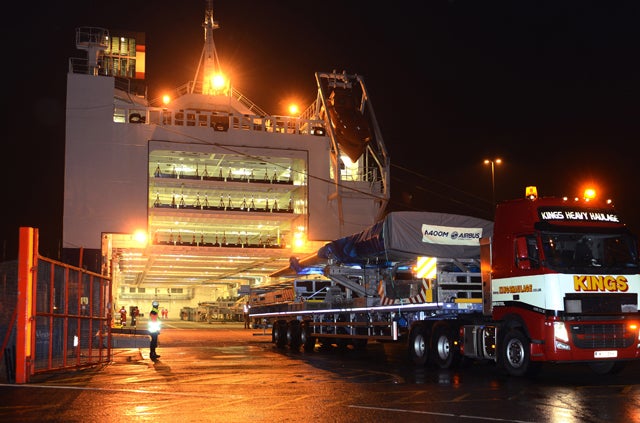 The company has shipped the aircraft’s wings from its production facility in Filton, UK, to its final assembly line at Seville, Spain.

Around 22 aircraft have been ordered by the RAF to replace its ageing C1/C3 (C-130K) Hercules transport aircraft fleet in November 2010.

Originally, the air force placed orders for 25 aircraft in May 2003, but the number was later reduced in the wake of increased project cost and delivery delays.

Working alongside Voyager and C-17 airlifters, the aircraft is expected to provide the RAF with an ability to move personnel and equipment for military and humanitarian operations worldwide, while offering significant improvements in reliability, maintenance and operating costs for the C-130K and J fleet.

"The company has shipped the aircraft’s wings from its production facility in Filton, UK, to its final assembly line at Seville, Spain."

Powered by four EuroProp TP400-D6 turboprop engines, the A400M, scheduled to be called Atlas in RAF’s operational service, is a multi-national military transport aircraft designated as a tactical airlifter with strategic capabilities.

With a lifting capacity of up to 30t, the airlifter is capable of landing on makeshift runways and can also be configured to conduct long-range cargo and troop transport, medical evacuation, aerial refuelling and electronic surveillance missions.

The aircraft has also been ordered by the air forces of Belgium, Germany, Luxembourg, Turkey, France, Spain and Malaysia.

Delivery of the first aircraft to RAF is scheduled to take place in September 2014.

Image: One of the wings bound for RAF’s first A400M aircraft being loaded onto the Airbus roll-on-roll-off ferry at its production facility in Filton, UK. Photo: courtesy of Airbus Military.

Defense and Civil Spends on Aircrafts in the United Kingdom: 2016 to 2024

Defense and Civil Spends on Aircrafts in Singapore: 2016 to 2024