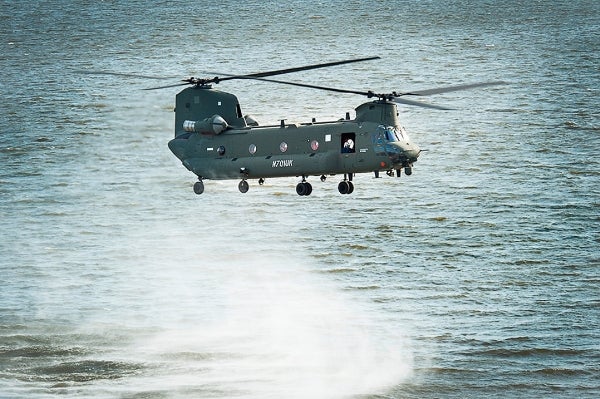 Boeing will hand over the first CH-47 Mk6 Chinook heavy-lift helicopter under contract to the UK Royal Air Force (RAF) before the end of 2013, a senior company official has revealed.

Speaking during the 2013 Royal International Air Tattoo (RIAT) at RAF Fairford in Gloucestershire, Boeing CH-47 programme vice-president in charge Chuck Dabundo was quoted by FlightGlobal as saying that the initial three aircraft are currently undergoing trials in the US.

The first two aircraft are being evaluated in Mesa, Arizona, and the NAS Patuxent River in Maryland, US, whereas the third is undergoing ground-based electromagnetic trials.

Around 14 Mk6 Chinook helicopters were ordered by the UK Ministry of Defence (MoD) to help enhance the RAF’s existing heavy-lift helicopter capability under a £1bn contract from Boeing in August 2011.

"The Mk6 Chinooks are expected to be fully compatible with the UK’s existing Chinook fleet, which has been extensively used in Afghanistan and Iraq, as well as during humanitarian efforts worldwide."

Awarded as part of the UK’s strategic helicopter vision to modernise its rotor-craft force structure, the contract also included a five year support package for the new helicopters, and brought the country’s overall number of Chinooks to 60.

The first Mk6 Chinook helicopter has successfully completed its initial test flight at Boeing’s helicopter facility near Philadelphia, US, in April this year.

The helicopters will feature a new monolithic airframe with UK-specific avionics, forward-looking infrared radar, aircraft defensive systems, interoperable communication and navigation equipment, as well as a digital flight control system, which enhances their ability to operate in the hot and dusty environments usually encountered in Afghanistan.

The Mk6 Chinooks are expected to be fully compatible with the UK’s existing Chinook fleet, which has been extensively used in Afghanistan and Iraq, as well as during humanitarian efforts worldwide.

Contract deliveries are scheduled to be completed by 2015, while operational deployment of the initial three and all 14 Chinooks is expected in early 2015 and early 2017 respectively.

Image: The Royal Air Force’s first Mk6 Chinook during its initial test flight at Boeing facility near Philadelphia, US. Photo: courtesy of Boeing.