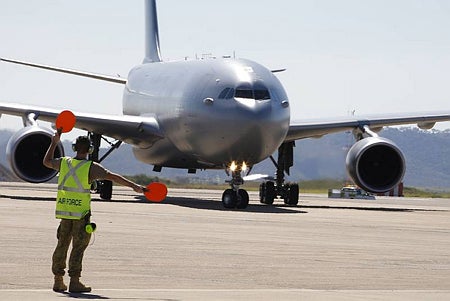 During the exercise, the tanker will conduct airborne refuelling of the RAAF’s F/A-18 Hornet fighter, using its hose-and-drogue wing-mounted pods, with both aircraft travelling in formation at a speed of more than 500km/hr.

”While we have a limited level of involvement in Pitch Black, we are conducting this deployment away from our home base to help prepare for future exercises and operations,” Fox added.

”Future Pitch Black exercises will see the KC-30A refuelling more aircraft, including the Super Hornet, Wedgetail, and some of our international partners.”

Exercise Pitch Black, which commenced on 27 July 2012, is attended by Australia, Singapore, Indonesia, New Zealand, Thailand and the US, and features mock offensive counter air and offensive air support operations in Australian airspace.

More than 2,200 personnel are participating along with a total of 85 aircraft, including Australian Super Hornets and Classic Hornets, Wedgetails, C17 and C130s.

The exercise is scheduled to conclude on 17 August 2012.

The KC-30A is a heavily modified variant of Airbus commercial A330-200 airliner, and is designed to conduct dual-role of air-to-air refuelling and strategic transport missions.

RAAF has to date taken delivery of four KC-30A MRTTs from Airbus, and is scheduled to received the fifth and final tanker by the end of 2012.