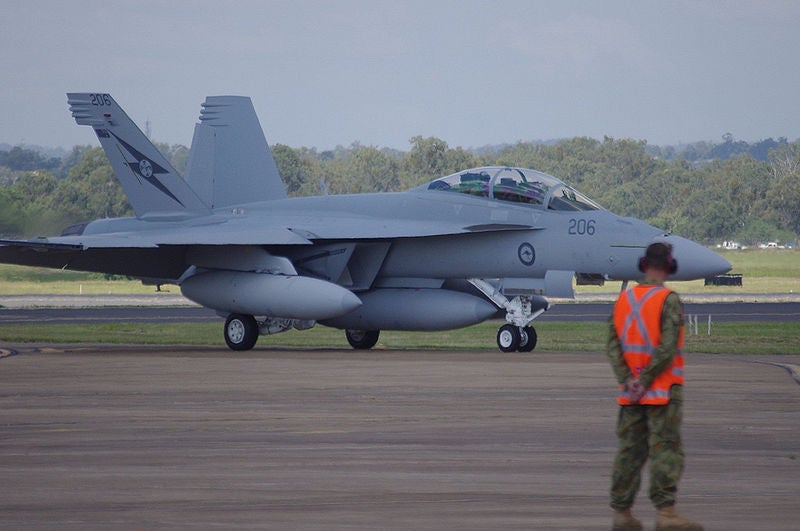 A total of nine Super Hornets, belonging to the RAAF’s No. 1 Squadron, are conducting operations alongside the air force’s other aircraft, including the Wedgetail Airborne Early Warning and Control (AEW&C) and international participants during the drill.

”Unlike the F-111 previously operated by No. 1 Squadron, the Super Hornet can fly missions which combine air-to-air against enemy fighters and air-to-surface strike against ground targets,” Jones added.

The aircraft is equipped with advanced electronics systems, such as the APG-79 active electronically scanned array (AESA) radar, to provide imagery of the battlefield.

Jones said: ”The coverage of the AESA radar, combined with an excellent data-link system, means that the Pilot and Weapons System Officer can have constant situational awareness of what is happening all around them, and can conduct near simultaneous air-to-air and air-to-ground attacks when required.

”Missions at Pitch Black can involve 60 to 80 aircraft, so it’s critical we have an uninterrupted view of what is happening in the battle space.”

According to the commander, the aircraft’s mission performance increases while operating with Wedgetail that offers a continuous radar feed to other aircraft.

The RAAF currently possesses 24 Super Hornets, which are expected to reach Full Operational Capability in December 2012.

Exercise Pitch Black, which concludes on 17 August 2012, has been attended by more than 2,200 personnel from Australia, Singapore, Indonesia, New Zealand, Thailand and the US, and features mock offensive counter air and offensive air support operations in Australian airspace.

Image: Australia’s Super Hornet fighter during its hand over ceremony at RAAF Amberley in 2010. Photo: courtesy of Peter Bailey.