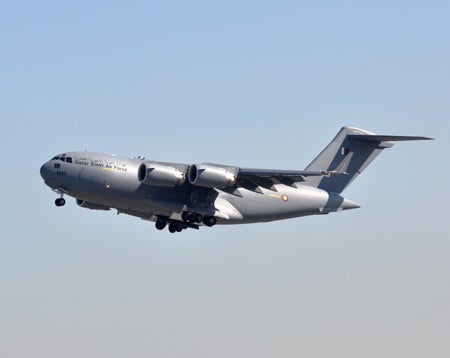 Boeing has handed over the fourth C-17A Globemaster III heavy-lift transport aircraft under contract to the Qatar Emiri Air Force (QEAF) at its assembly facility in Long Beach, California, US.

The delivery fulfils an agreement signed between the Qatari and US governments for the purchase of two C-17s, in addition to the two it has already acquired as part of a contract awarded to Boeing in July 2008.

The contract also included delivery of associated equipment and services, and options for the procurement of two additional aircraft.

The initial two aircraft were delivered in 2009, while the third was received by QEAF in early 2012.

QEAF’s C-17 aircraft provided humanitarian assistance to Haiti and Chile following earthquakes in early 2010, in addition to supporting the Nato-led operation in Libya and delivering relief for drought victims in Kenya this year.

After-delivery support to the QEAF’s C-17 fleet is also provided by Boeing, as part of the C-17 Globemaster III Integrated Sustainment Program (GISP) performance-based logistics agreement with the US Air Force (USAF).

It is also capable of performing tactical airlift, medical evacuation and airdrop missions.

Boeing has delivered 248 C-17s, 218 of which are operated by the USAF, while the remaining 30 are in use in Australia, Canada, Qatar, UAE, the UK and and the 12-member Strategic Airlift Capability initiative of Nato and Partnership for Peace nations.