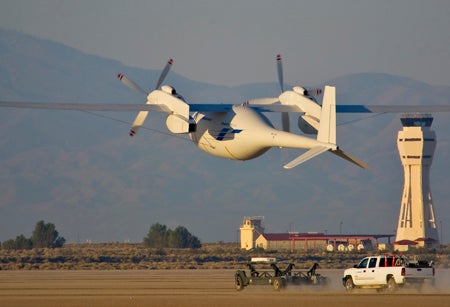 Boeing Phantom Works president Darryl Davis said the flight puts Boeing on a path to accomplish another aerospace first, with the capability of four days of unrefuelled, autonomous flight.

During the 28-minute flight, the high-altitude, long-endurance system travelled atop its launching cart system and reached an altitude of 4,080ft and speeds of up to 62k. The UAS landed safely, despite sustaining minor damage to the landing gear from impact.

"The team is now analysing data from the mission and preparing for our next flight. When we fly the demonstrator again, we will enter higher and more demanding envelopes of high-altitude flight," Mallow said.

The UAS had completed a series of taxi tests in April that validated its ground guidance, navigation and control, mission planning, pilot interface and operational procedures.

The liquid-hydrogen powered aircraft is designed to remain airborne for up to four days, while reaching altitudes of 65,000ft.

"While Phantom Eye is important for many reasons, future ISR, strike and bomber programmes also will benefit from the technologies we are developing and maturing for our customers," Davis said.