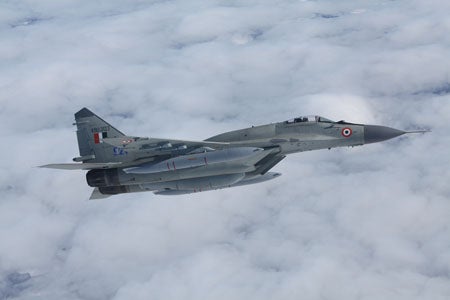 The delivery, which is almost two years behind schedule, forms part of a $900m contract awarded in 2008 by the IAF for the upgrade of 69 of its operational MiG-29 aircraft to advanced MiG-29 UPG standard.

An initial batch of six MiG-29s is scheduled to be modernised in Russia, while the remaining 63 aircraft will be retrofitted at the Hindustan Aeronautics Limited (HAL) facility in India using Russian components.

MiG general director Sergei Korotkov said the delivery represents the first step in the contract execution for the upgrade of the IAF’s MiG-29 aircraft fleet.

”We are getting ready for the second phase of work, which provides modernisation of fighters in India in close cooperation with the Indian industry,” Korotkov added.

Encompassing the integration of a new avionics kit, Klimov RD-33 turbofan engines, and a Phazatron Zhuk-M radar system, the upgrades are expected to expand the fighter’s service life up to 40 years.

The aircraft has also been equipped to boost its beyond-visual-range combat ability and for air-to-air refuelling to extend flight time for up to 3,500 hours.

The upgrades improve the aircraft’s ability to engage airborne targets and to strike ground-based moving and stationary targets during day and night and in all weather conditions.

Maiden test flight of the first upgraded MiG-29UPG aircraft was conducted by MiG at airdrome of the Gromov Flight Research Institute in Russia, in February 2011.