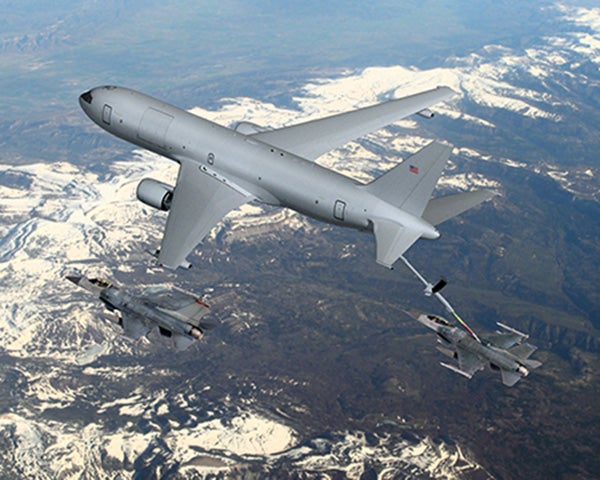 ITT Exelis has been awarded a contract for production and delivery of anti-jam GPS antenna systems for the US Air Force’s (USAF) KC-46 refuelling tanker development programme.

Awarded by Raytheon, the contract covers the supply of an unspecified number of rugged N79 controlled reception pattern antenna (CRPA) units, which keep an aircraft’s GPS system connected even in the presence of multiple threats.

Weighing 8lb, the N79 CRPA is a seven-element antenna designed to offer anti-jamming GPS reception through a combination of null-forming and beam steering, when used together with appropriate seven-channel beam-formers.

The antenna is capable of preventing deliberate jamming and unintentional interference of timing signals when incorporated with anti-jam GPS systems, such as the Raytheon Navshield and the next-generation advanced digital antenna production (ADAP) systems.

Several hundreds of anti-jam GPS antennas systems have been delivered to date by the company to the US and allied militaries for installation on fixed and rotary-wing aircraft, ships and unmanned platforms.

Developed from the Boeing 767-200ER, the KC-46 is a military aerial refuelling and strategic transport aircraft, designed to replace the USAF’s ageing KC-135 Stratotankers fleet, which has served as its primary refuelling aircraft for more than 50 years.

Boeing is under contract to deliver 18 KC-46 refuelling aircraft by 2017 to the USAF, which is planning to procure a total of 179 tankers.

Deliveries will continue until 2028, with the initial flight of the first aircraft is scheduled to take place in late 2014.

Manufacturing work under the contract will be carried out at the company’s facility in Bohemia, New York, US, while the delivery schedule remained undisclosed.