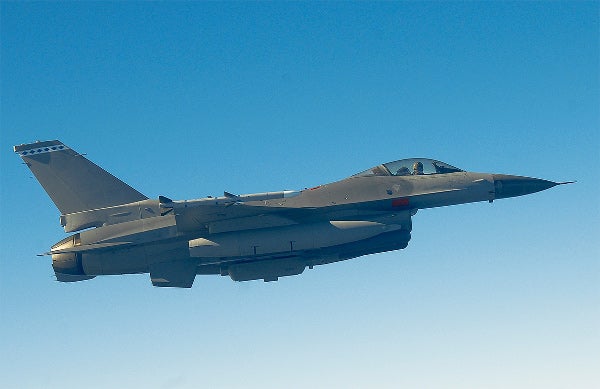 Conducted at Edwards Air Force Base (AFB) in California, the six-week tests were carried out on simultaneously operating multiple radio frequency systems in an AIDEWS pod-equipped F-16 aircraft.

The resulting pod antenna patterns on the aircraft were subsequently measured by the ITT team along with system interoperability between the AIDEWS jamming pod, fire control radar and ALR-69 radar warning receiver.

Exelis Electronic Systems AIDEWS business area lead Stuart Altman said: "This kind of comprehensive testing shows we already have a well-integrated, effective system to protect the F-16, and we’ll be using the results of this testing to make the system even better."

The chamber-based testing was conducted by the company in an effort to ensure efficient operation of the pod with other aircraft systems, and also confirm simultaneous individual operations of the systems without interfering with one another.

Enabling the company to decrease the amount of flight testing required for AIDEWS performance verification, the testing also lowers cost and time for the system’s qualification.

Over 180 AIDEWS systems are currently under contract for six nations as part of the F-16 foreign military sales programme, while 140 systems have already been delivered along with continuous software support to customers worldwide.

AIDEWS is installed aboard the F-16 fighters of US, Chile, Poland, Turkey and Pakistan air forces, and can also be integrated into the NH-90 helicopter, V-22 Osprey, MH-47, and MH-60 Black Hawk helicopters, as well as several commercial platforms.