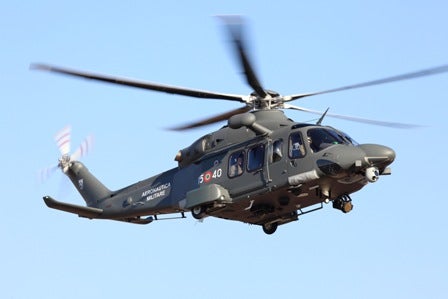 AgustaWestland chief executive officer Bruno Spagnolini said that the operational readiness of the new aircraft is the first major step in support of the service’s modernisation programme which will also see the HH-101 "CAESAR" replacing the HH-3F Pelicans in the Combat SAR role.

"The HH-139A will complement the HH-101s while providing a quantum leap forward in operational capabilities and cost effectiveness compared to the present fleet of HH-3Fs and HH-212s," Spagnolini added.

The AgustaWestland-built HH-139A helicopters will serve as an interim solution to replace the ageing HH-212 and HH-3F helicopters role of search and rescue (SAR) operations across the nation.

Additional features include one engine inoperative capabilities even in hot and high operating conditions, as well as an advanced integrated cockpit to minimise pilot workload and allow the crew to accomplish mission objectives.

Designed to meet the Italian Air Force’s requirement for a new medium class SAR helicopter, the helicopter SAR certification is expected to be received in 2013.

Other military customers that are already operating the AW139 include the Irish Air Corps, the UAE Air Force and the Qatar Armed Forces.