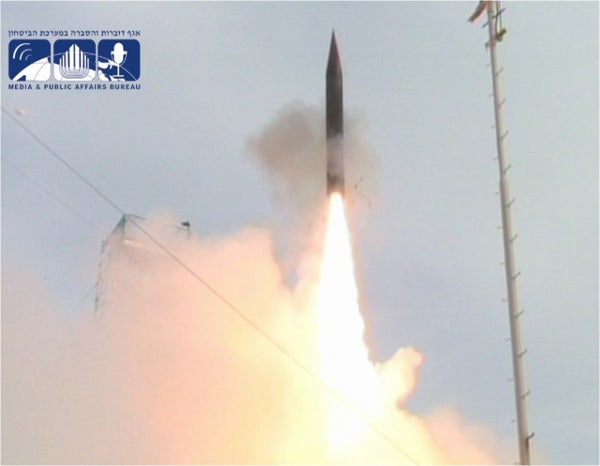 The Israel Missile Defense Organization (IMDO) has conducted the initial flight test of the Arrow-3 interceptor missile at a test range in central Israel, as part of a series of tests and developments in the Arrow anti-missile defence formation.

During testing, which was jointly carried out with the US Missile Defense Agency (MDA) officials, the interceptor followed an exo-atmospheric trajectory through space after launching over the Mediterranean Sea.

An undisclosed military source was quoted by The Jerusalem Post as saying that the interceptor attained hypersonic speed, and reached an altitude of 100km before entering space.

"It followed various objects, such as stars, and gained further altitude. Its engine stopped after six minutes," the source added.

Commenting on the flight test, Israeli defence minister Ehud Barak said: "This is an important milestone for the state of Israel’s multilayered defence system, which includes Iron Dome, David’s Sling, Arrow 2 and Arrow 3."

"An undisclosed military source was quoted by The Jerusalem Post as saying that the interceptor attained hypersonic speed."

Jointly developed by Israel Aerospace Industries (IAI) and Boeing, Arrow-3 is a next-generation interceptor for the Arrow weapon system, designed to engage incoming long-range ballistic missiles at higher altitudes in the stratosphere compared to earlier interceptors.

The interceptor had already tracked and intercepted a Blue Sparrow missile launched by an Israeli Air Force’s (IAF) F-15 fighter jet to replicate long-range Iranian ballistic missiles during a testing in February 2012. The Arrow-3 interceptor is expected to achieve initial operating capability (IOC) in 2014.

A joint effort between the IMDO and MDA since 2002, the Arrow is a family of anti-ballistic missiles designed to address an Israeli requirement for a theatre missile defence system that will prove to be more effective against ballistic missiles compared to its MIM-104 Patriot surface-to-air missile system.

Image: Arrow-3 interceptor missile being launched from a test range in Israel. Photo courtesy of MDA.