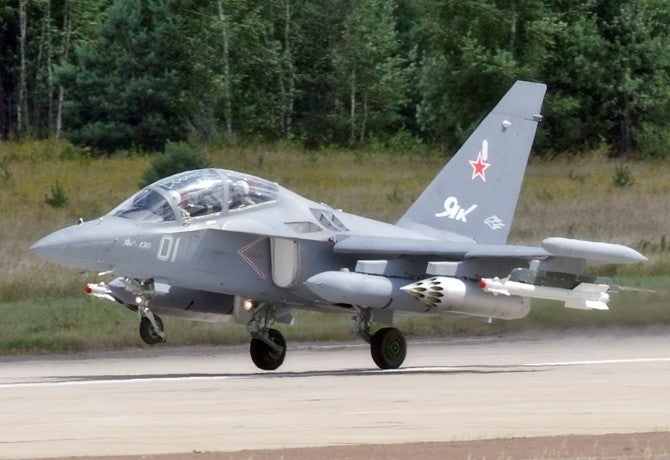 Alexei Fedorov, Irkut president, was quoted by RIA Novosti as saying that the upgrades are primarily aimed at enabling the use of the aircraft for both advanced weapon training and combat missions.

"We plan to grow the capabilities of this aircraft, fitting a radar and electro-optical, thermal and laser systems. Increasing the Yak-130’s combat potential also allows it be potentially used in local conflict situations,” said Fedorov.

Komstantin Popovich, Irkut vice president, had earlier told Aviation Week that the first stage of upgrades will include installation of an in-flight refuelling system and optronic pod and is estimated to be complete in 2013.

According to Popovich the upgrades involve the integration of radars to provide the aircraft with target detection capabilities for Kh-31, Kh-38 and Kh-29 air-to-ground missiles.

Three options are currently being evaluated by the company, including a slot array antenna radar from Phazotron-NIIR, onboard radar from Tikhomirov-NIIP and a radar pod from St. Petersburg’s Leninetz plant.

Capable of carrying a maximum combat load of three tonnes, the aircraft can also be configured to conduct light-attack and reconnaissance missions.

As of January 2012, eight Yak-130s were operational as advanced jet trainer with Russian Air Force, which currently has 65 aircraft on order, with deliveries scheduled to complete by the end of this year.

Image: A Yak-130 combat trainer being demonstrated during MAKS 2009. Photo: courtesy of MastermindPrime.