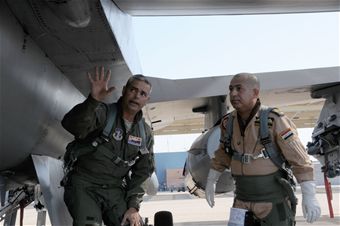 Two Iraqi pilots have joined aviators from the US, Singapore, Poland, Denmark, Japan and the Netherlands to conduct F-16 operational training with the Arizona Air National Guard’s 162nd Fighter Wing (162nd FW), even though the initial batch of its multi-role fighter jets are not set for delivery until September 2014.

IQAF brigadier general, Abdulhussein Lafta Ali Ali, who was part of a delegation that visited US to evaluate their students’ progress and reaffirm partnership with the fighter wing, said the F-16 project holds significant importance for both the nations.

"This is the first time Iraqis have flown F-16s. It’s important for us to understand the training schedule and syllabus for our student pilots because the first pilots who train here will one day be examples for our other pilots," Ali added.

Mick McGuire, 162nd FW commander colonel, said: "They have an opportunity to see what a professional operation we are and as a result of their visit I think we’ll have a long-standing relationship with the Iraqi air force – at least through 2020 – training F-16 pilots and providing a true coalition warfighting partner for the United States and an ability for them to defend their country for years to come."

As part of an existing current contract between US and Iraq, a total of 27 pilots are scheduled to be trained by the 162nd FW, who will remain in Tucson, until the delivery of their F-16 fighters.

Iraq had ordered a total of 18 F-16 C/D Block 52 Fighting Falcon aircraft, which includes 12 C and six D models, along with engines and support equipment from Lockheed Martin, under a $199m contract in July 2012.