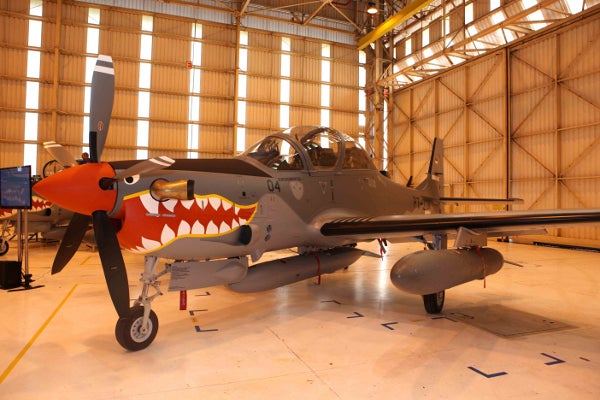 Embraer Defense and Security has handed over an initial batch of four A-29 Super Tucano aircraft to the Indonesian Air Force (TNI-AU) at its Gaviao Peixoto facility in Sao Paulo, Brazil.

The delivery follows a contract received by the company in November 2010 for the supply of eight light attack and tactical training aircraft, as part of the Indonesian Defence Force’s equipment modernisation programme for 2009 to 2014.

The award also includes delivery of ground support stations along with an integrated logistics package to the air force.

Luiz Carlos Aguiar, Embraer Defense and Security president, said the company is honoured with the air force’s selection of Super Tucano as the preferred choice in its fleet modernisation programme.

”The Super Tucano is a mature, proven and mission-ready aircraft with more than 160 units in operation globally,” Aguiar added.

Indonesia placed a further order for second batch of eight Tucanos at last month’s Farnborough International Airshow, bringing its acquisition to a total of 16 aircraft, with deliveries beginning in 2014.

The aircraft are intended to replace the air force’s existing fleet of North American Aviation Rockwell-built OV-10 Bronco turboprop aircraft, and will be deployed in support of light attack, surveillance, aerial intercepts and counter-insurgency (COIN) missions.

Featuring an advanced electronic/optical/infrared and laser technology, secure radios with datalink communications and weaponry, the aircraft can also be employed for pilot training purposes.

The aircraft is currently in service with Brazil, Dominican Republic, Colombia, Ecuador, Chile and Burkina Faso, and has been ordered by Angola and Mauritania air forces.