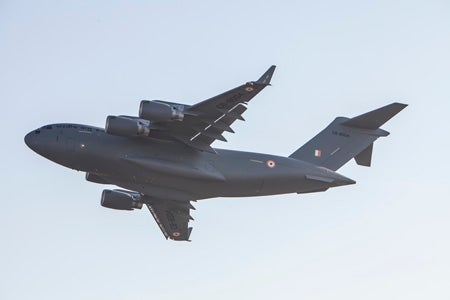 Boeing has handed over an additional C-17 Globemaster III heavy-lift transport aircraft to the Indian Air Force (IAF), expanding its tactical airlifter fleet. Representing the fourth aircraft to have been delivered to date to the IAF, the aircraft departed Boeing’s manufacturing facility in Long Beach, California, US, on 19 October 2013. The delivery, which comes a month after induction of the aircraft into the air force’s operational service, keeps the company on track to deliver a total of five airlifters this year. Around ten 70t C-17 aircraft were ordered by IAF from Boeing through a $4.1bn deal for the replacement of its ageing Russian IL-76 airlifter fleet, in June 2011. Expected to be used for military and humanitarian airlift roles during emergencies from Hindon Air Force Base in New Delhi, India, the IAF C-17s were most recently deployed in support of Cyclone Phailin relief operations. Powered by four Pratt & Whitney F117-PW-100 turbofan engines, the C-17 Globemaster is designed to conduct rapid strategic airlift of troops and supply palleted cargo to main operating bases or forward-operating bases (FOBs) in extreme environments worldwide.

"The delivery keeps the company on track to deliver a total of five airlifters this year."

Capable of transporting large payloads across vast ranges and landing on short, sharp runways, the aircraft is also capable of performing tactical airlift, medical evacuation and airdrop missions. The aircraft is also operated by air forces in the US, Australia, UAE, Canada and Qatar, the UK and the 12-member Strategic Airlift Capability initiative of Nato and Partnership for Peace nations. The delivery of the remaining five C-17s under contract is scheduled to for completion in 2014. Boeing is also supporting the IAF C-17 fleet through the Globemaster III integrated sustainment program (GISP) performance-based logistics contract, which ensures mission readiness by enabling access to an extensive support network for global parts availability and economies of scale.