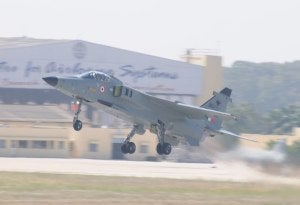 Commenting on the test flight, HAL chairman Dr. R. K. Tyagi said: ”This is a significant moment for HAL as the upgrade will result in major operational improvement with regard to all weather air to ground, air to sea and air to air capabilities through incorporation of multimode radar.”

Incorporating re-engining and a change to higher capacity alternators, the Darin III upgrade is designed to transform Jaguar into a powerful IAF aircraft with an extended service life.

News
US and Australian air forces sign joint vision statement
Data Insights
View All
"HAL will also conduct the fleet compliance, whereas its Overhaul Division will be responsible for the aircraft’s trial modification."

HAL is currently upgrading the IAF’s 100 Jaguar aircraft from the initial version, called Darin-1, as part of an INR31.3bn ($0.57bn) contract it received from the Indian defence ministry in 2008. The upgraded programme is scheduled for completion by December 2017.

The company has indigenously carried out the aircraft’s system requirement capture, specification preparation, software, hardware, electrical, mechanical design and development at its Mission and Combat System Research and Design Centre (MCSRDC) in Bangalore.

HAL will also conduct the fleet compliance, whereas its Overhaul Division will be responsible for the aircraft’s trial modification.