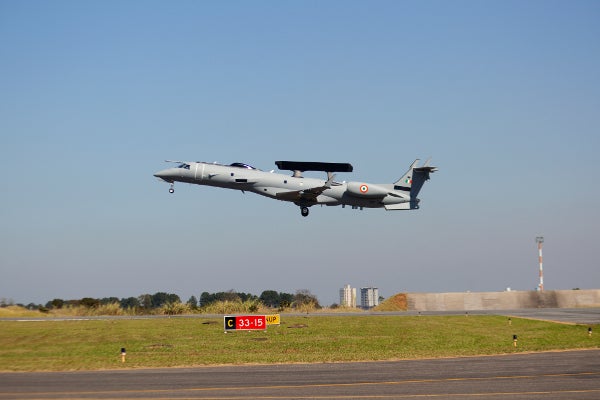 Prior to delivery, the aircraft had successfully completed ground and flight tests, and met operational targets set by both Embraer and the Defence Research & Development Organisation’s (DRDO) Centre for Airborne Systems (CABS).

The aircraft will be handed over to the Indian Air Force (IAF), following the installation of DRDO-developed missions systems.

Luiz Carlos Aguiar, Embraer Defense and Security president and CEO, said: “The collaboration with DRDO in such a complex programme strengthens the ties between Brazil and India.”

Dr Elangovan, DRDO R&D (Avionics & Aero) chief controller, said the AEW&C features in-flight refuelling system, significant increase in electric and cooling capacity and a comprehensive set of structural changes, which will enable integration of advanced mission systems that are developed by CABS along with its work centres of DRDO.

”The airborne Active Electronically Scanned Array (AESA) designed and developed by CABS, is now flying on top of this modified Embraer aircraft is one example of such cooperation,” Christopher added.

A total of three AEW&C aircraft were ordered by IAF from Embraer under a $208m deal in July 2008, to help enhance its air defence capability.

The aircraft is also operated by Brazilian, Hellenic, and Mexican air forces.