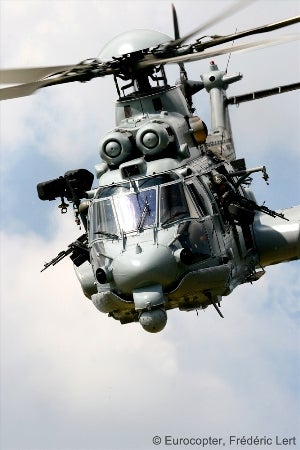 Eurocopter’s Brazilian subsidiary Helibras has opened a new facility in Ijatuba, Minas Gerais, with an investment of $210m, to assemble 50 EC725 Cougar military helicopters for the country’s armed forces.

Commenting on the opening, Helibras president Eduardo Marson Ferreira said the facility will support both national and local companies, whilst also benefiting a major supply chain.

Eurocopter president Lutz Bertling said the new plant means Helibras will be capable of manufacturing the first 100% indigenous helicopters in 2025.

Employing over 700 workers, the new plant will be responsible for the assembly of the EC225 helicopter, a commercial EC725 variant operated for airlift missions between the country and offshore oil rigs.

Helibras received a €62m contract from Eurocopter in January 2012 for the supply and management of all Cougar helicopters’ spare parts, stocks and associated technical support, for a period of five years.

The order forms part of a €1.9bn deal secured by Eurocopter in 2008 for the delivery of 50 Cougars under the H-XBR project to meet Brazil’s requirements for long-range multipurpose helicopter for tactical training and initial logistical support missions.

Out of 50 helicopters featuring 50% local content, 16 will be delivered to the Air Force, Navy, and the Army, while the remaining two Cougars will be operated by the government.

Eurocopter has already handed over the first three EC725s to Brazil in December 2010, and is scheduled to complete the remaining deliveries by 2016.