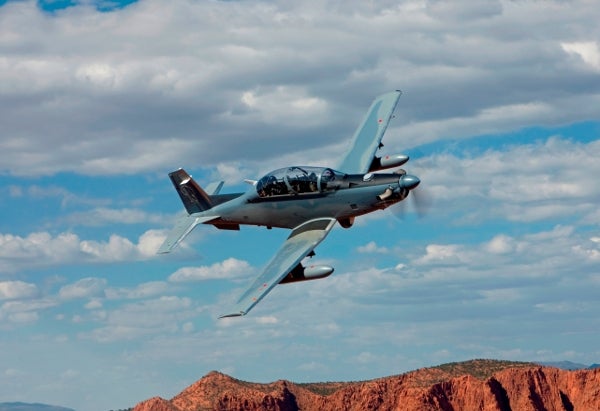 Hawker Beechcraft Defense Company’s (HBDC) AT-6 light attack aircraft has successfully completed Phase III of its weapons assessment at Eglin Air Force Base in Florida, US.

More than 265 bombs and rockets were employed and 3,000 rounds were fired by the aircraft’s 50-calibre guns during the tests, according to an announcement by HBDC at the Air Force Association’s 2012 Air & Space Conference and Technology Exposition, currently underway in WashingtonDC, US.

Phase I and II of the weapons assessment involved computer-assisted deliveries of Mk-81and Mk-82 general purpose and GBU-12 and GBU-12 Paveway II laser-guided bombs, alongside air-to-ground and air-to-air gunnery systems.

All weapons testing was accomplished with oversight from the US Air Force Air Armament Center and the Air National Guard and Air Reserve Command Test Center.

Powered by a single Pratt and Whitney PT6A-68D engine, the AT-6 is an armed variant of T-6B Texan II aircraft under development to support variety of operations, including training, manned intelligence surveillance and reconnaissance, and light precision attack missions.

Image: An AT-6 light attack aircraft during its flight. Photo: courtesy of Hawker Beechcraft Corporation ©.